Slippery Surface, No Entry…that’s not what she said.

It was one of those nights that you didn’t know you needed but it was in a way therapeutic. We didn’t plan it, it just happened and it felt great! Before your mind goes awry let me tell you what happened. It was a Friday afternoon, I had just taught my fourth HIIT class of the day in addition to my day job and I was ready for rest. Lauren had dominated in the front row of my 5:00. We were both sweaty, hair frizzy, and the remains of a jam packed work week showing in and under our eyes. Usually on Fridays, Lauren comes to my class and then we head back uptown, have a glass of wine and a platter of cheese and call it a night. This night the sun was still shining and it was hot, the first real glimpse of summer in the city. Neither one of us wanted to go back to the Upper East Side for dinner, we just weren’t feeling it.

Despite our fatigue we decided to just walk through the city until we found a place that appealed to us. We walked south through the West Village, passing famous landmarks like Magnolia Bakery from Sex and the City and the apartment building from Friends. You know the one. It’s the one that would have been way out of budget for 20 somethings working in the service industry, even in the 90s. We passed the firehouse of a friend, snapped a selfie and sent it to him as proof we had been there. We passed a gorgeous block of gated brownstones. We stood cheeks pressed to cast iron gate admiring both the vintage New York City architecture and insane wealth that must live inside. 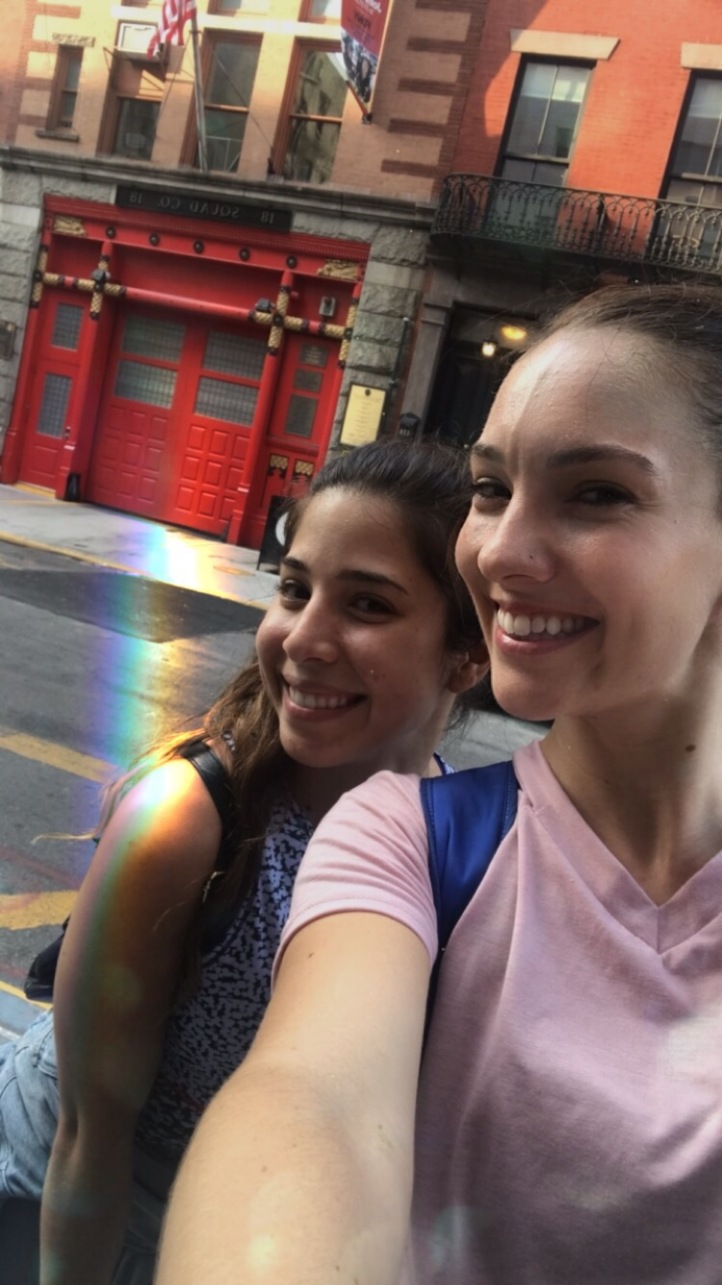 Somewhere around West 4th street it came to us, or Lauren rather but I was on board! She suggested Eataly and that couldn’t have been more perfect. Eataly is this magical place in the Flatiron district that is full of authentic Italian wine and food. There are several restaurants within the one building. It has a food court feel but they are all sit down table service and are all high quality and delicious. We walked about a mile from the village to get there and settled in at a two top, uncomfortably close to the table next to us. Typical New York to make the most of a small space. They squeeze you in but distract you with beautiful twinkle lights and exposed brick. Fast forward to a bottle of wine, cheese platter, lasagna, and pizza later. We were stuffed but not at all ready to call it a night. Onward we walked!

Because we’re all sass and little class we decided to get a bottle of wine for the walk home. We went into the nearest liquor store we could find and the very nice but stinky(deodorant dude) employee helped us find what we were looking for as if we were wine connoisseurs hosting a dinner party. Nothing says wine connoisseur like frizzy hair and spandex. We got paper coffee cups from the bodega next door and found a corner to pour our wine. Conveniently for me, our corner of mischief housed a shop cat sleeping in the window. I excitedly tapped the glass and tried to get its attention and then, as Lauren caught on video, I announced that this cat gave zero farts about me. We poured our booze and continued on our Friday night journey, my furry friend not batting an eye.

A few blocks up we saw a sign for Psychic readings for only $10. I’ve never done it because lets be honest, it’s silly but tonight was all about being silly so why not!? All giggles we followed the sign’s arrow up the staircase into a building that oddly resembled all the crime scenes from any episode of Law and Order SVU. The first door at the top of the stairs had a sign indicating that was the right place. I opened the door and saw a very large man shirtless passed out on a couch as a TV sounded in the background. Not what I expected! Shocked, I shut the door and told Lauren this was NOT the place. We walked a little further down the hall to another door also labeled “Psychic”. Lauren knocked and a lady called out, “Yes?” “Ummm…we’re here for the psychic?”, Lauren answered. The lady inside yelled back to wait one minute and then we heard her say “Quick, get all that stuff off the bed.” Wide eyed we looked at each other in shock and without discussion we ran! We heard locks clicking from the door above as we booked it down the stairs. Like in any horror film, it was race between us getting out of the building before they opened the door and saw us. Also like in any horror film, we made it by a millisecond. Once we caught our breath and the laughter died down, we continued uptown. No more psychic detours.

Our next stop was Times Square. Amidst our wine buzz and New York City high we thought it would be hilarious to accidentally, but on purpose, walk through the photos of tourists. Our performances were Oscar worthy. With dazed looks we stepped right in the shot of strangers and looked up at all the lights in fake awe. And the Academy goes to these two brats ruining shots of innocent tourists from around the world. 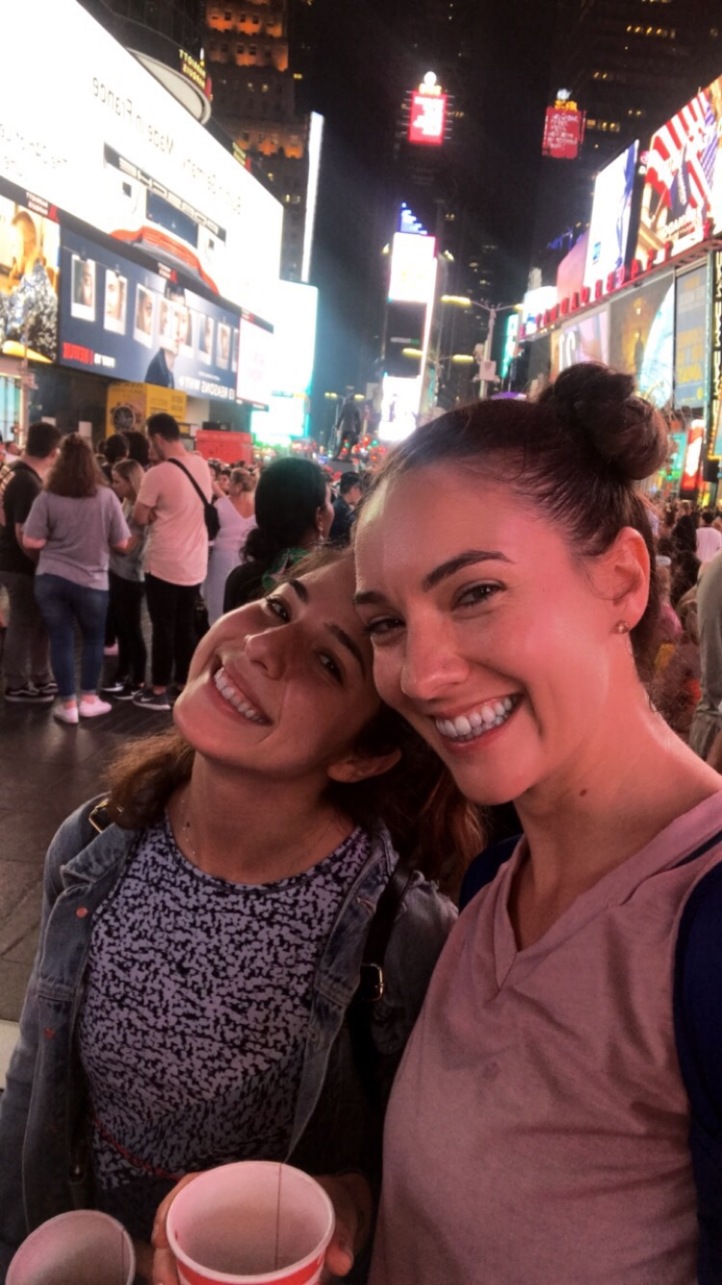 Onward we went right up to Central Park. Right on the south end stands a statue of famous Cuban poet José Martí. Lauren told me his story and how he impacted Cuban history. I don’t remember the details but I do remember being enthralled and impressed.

As we followed the perimeter of the park, we passed the horse carriages, the plaza hotel, and followed just far enough behind some cops. My pretend tiptoeing and shooshing warning Lauren to be cool due to our open container had her laughing hard and of course rendered an Instagram video. Turning the corner at 59th we stopped at a bench for a refill of vino and sat for a bit watching the late night hustle of NYC pass by. Our final stretch of our journey lead us right up 5th Avenue to the Metropolitan Museum of Art. The famous steps beckoned us. We sat on the top row, chatting it up, feeling like Blair Waldorf from Gossip Girl but definitely not looking or acting like her. I looked up at the beautiful buildings along 5th Ave wondering what kind of wealth must live there and assuming that the tenants were likely in their Hamptons homes on a warm night like tonight.

Lauren was telling me a story but I wasn’t listening. My attention had been brought to the large fountain at the base of the steps. “Lauren, I just want you to know I stopped listening to you a while ago because I’m going to go jump in that fountain,” I said very matter-of-factly and started removing my sneakers. Without question, without hesitation and before I could blink, Lauren too had her shoes off and was by my side making her way down the steps to the fountain. With total disregard to the “Slippery surface. No entry” sign, we climbed in and chased the rise and fall of the fanning fountain. It felt amazing! Not only was it refreshing after the hot night and several miles of walking, it made us feel young. Like high school young; carefree and limitless. We jumped in and out of the fountain for probably an hour laughing nonstop, all while taking videos and boomerangs trying to capture the perfect angle. We asked a couple passing by to take a photo of us. They were hesitant at first but gave in to our happy-go-lucky energy. As the man counted down from three, we heard. “Ok ladies, you have to get out of there now.” There stood the museum security guard looking very unamused. We were not surprised by his presence but rather how long it took him to get there. “Ok but just one more picture!” Lauren shouted. We rebelliously posed for our final picture and then climbed out, soaked from head to toe, barefoot on the streets of NYC and totally happy. 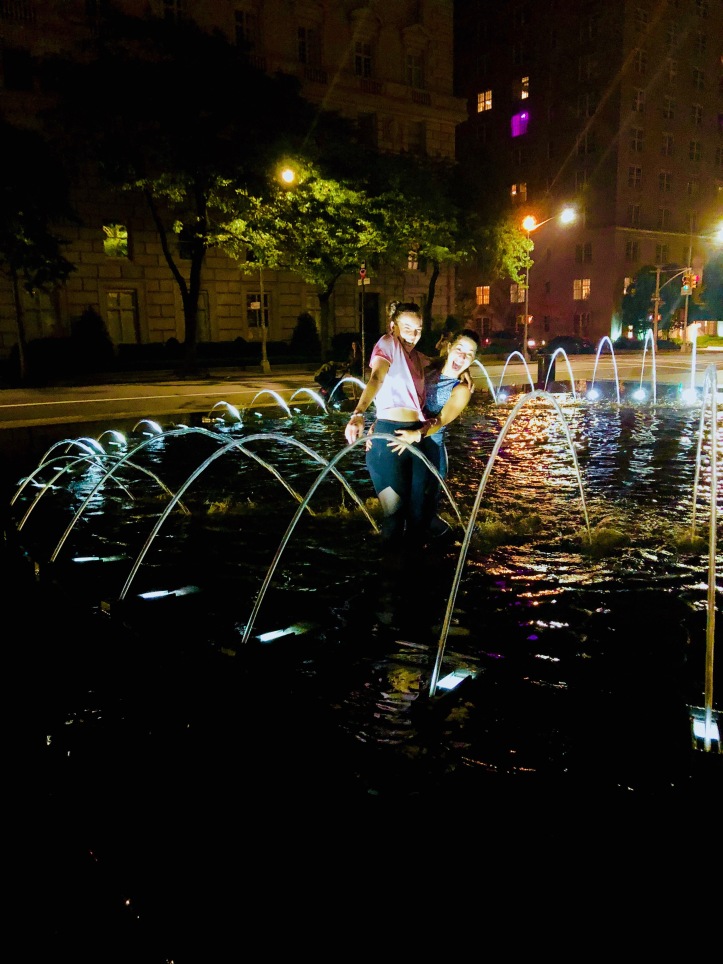 Our night had clearly come to it’s end but we couldn’t have imagined it turning out an better. With our shoes back on, we made our way east toward 2nd avenue where we parted ways, wishing each other a good night and off to our own apartments we went. Still wet, I now found myself shivering as I made my way home.

If I were to sit and recap memorable moments of my years in New York City, that night would definitely make my top ten. We walked from West 13th street all the way up to East 93rd street. We saw more landmarks in one night than some tourists might see in a whole weekend and I can’t imagine it with anyone else. Lauren is a true ride-or-die, no-questions-asked, always-there-for-you kind of friend. I met her at my original spin studio where she always shined in the front row. Her energy was contagious. As an instructor, all you need is one person to give one “woohoo” and set the tone for the rest of class. Lauren was always our one. Now she’s a badass in the front row when I teach at Kore and very soon she will conquer on the podium as an instructor herself. When that day happens, I will be there. Whatever it takes, I will be there cheering so flipping loud! I will be there just as she has always been there for me. She was there for my final class at my old studio, my first class at Kore, my practice rides at Fly, and my last two marathons. She’s always down put on a tight dress and heels to go out, or down to put on sweatpants and facemarks to stay in. She’s down to walk through the streets of New York on a hot humid night, and down to ignore signs to run through museum fountains. She’s a total yes girl and yasss queen. Lauren is extremely confident in her own skin, knows the words to every song ever written and could eat anyone under the table. I’ve only gotten close to Lauren in the last year but in that time, we’ve become quite the duo. A lot of what I write about in this blog are memories that were once made in the early years of my time in New York. I’m thankful to Lauren for helping make up some of my best memories of my final year.

I know after the move I won’t see her as often as I do now (basically everyday) but I do know she’s a ride or die for life, the type of friend who will make an effort to be a friend. She flew from Atlanta just for the weekend, just for my birthday thus proving my point. Like I wrote in a previous blog; the people who are meant to be in your life will find a way to stay in your life and I know my lil sassy Latina will be in my life toda mi vida. Por que la amo. Y estoy borracho.