The Fire on 93rd Street

The purpose of this blog is for me to recount my memories, good and bad, of my time here in New York City to share with anyone interested in reading and for me to have in one place other than my crazy brain. Unfortunately today’s post is less than happy but one memory I refuse to forget, as it is one of those monumental moments in life that checked my gratitude and appreciation for the life I have. On October 27th, 2016 at 3:30 in the morning I was jolted awake by Tom. “Shit Jezz! Get up! There’s a fire!”, his exact words. I sat up confused as the sounds of firetrucks absorbed into my brain. The sounds of sirens in NYC are basically background noise if you live here but there are times when they’re a little louder, a little more aggressive and you wonder what is going on. As a firefighter’s wife, I always notice the sirens and can differentiate by sound of it’s a police car, ambulance or fire truck. That night it was all of them, times ten.

Tom called me to the window where we looked out and saw the reflection of massive flames. Our apartment is in the back of the building, top floor and from the look of it, this blazer was coming from a few doors down on our side of the block. Normal people would exit the building if they thought a building attached to their own was on fire but of course Tom and I went right to the roof to assess the situation. We discovered that the flames were blaring from out of a shaft way of the building a few doors down and across the street. Tom and I parked ourselves directly across form it and watched. We got there before the firemen made it to the roof of the burning building. At first the flames were strictly in the shaft way. Within 10 minutes flames were blasting out of the second floor apartment. Shortly after that they were coming out of the fourth floor and then the adjacent building. It got out of control insanely fast and was mesmerizing. I couldn’t stop staring filled with adrenaline and excitement. Though he was off duty, Tom couldn’t just sit there and watch. He went down in his pjs to go help in any way he could, giving me a lecture to walk slowly when walking across buildings and watch for shaft ways as he left me. Ok thanks Dad. 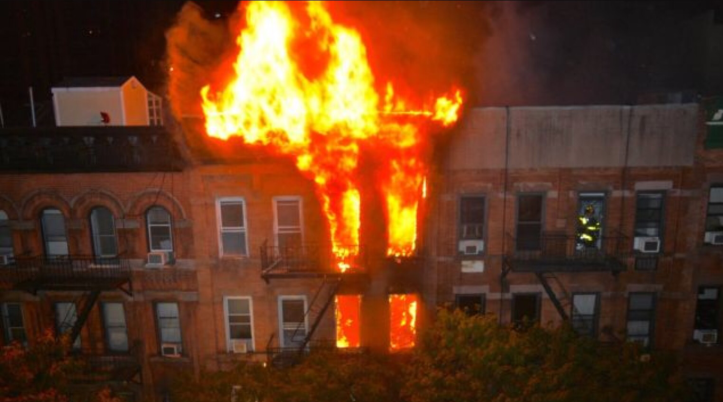 Within minutes of Tom leaving, the firefighters working their way up and down fire escapes began blasting out windows, glass shattering to the street below. My excitement turned to instant fear as I knew my husband was down below with his beloved crocs and no head gear to protect him.

The next two hours flew by in what felt like minutes. It was the first chilly fall night but my face burned from the flames 100 feet away. Ladder 13 was the first to extend their bucket. It was crazy to see these men who I know by name, who’s families I know personally, working so hard to fight these flames. It’s strange to explain. My husband is a firefighter. I say it all the time with major pride but I’ve never actually seen him fight fire. All these men, my FDNY brothers, are firefighters and I’m proud say they are my friends but I had never actually seen them fight fire. I felt equal parts pride and fear. At one point, I watched a firefighter jump from a window to a fire escape from four flights up. My heart was pounding waiting impatiently for Tom to return. Shortly after 5:30am he did and we sat together, adrenaline pumping through us, eagerly retelling our perspectives of the nights entertainment. We watched the men at work until around 6:15 am in which I had to get ready for work, leaving the fire still burning.
The next day I retold the story to everyone I saw, not authentically grasping the magnitude of what had happened. To retell it felt like I had some inside knowledge of the coolest gossip in town. People were fascinated by my story and photos, the only worthwhile topic of conversation the whole day.

When I returned home that afternoon I could not get down my block. It was closed off to pedestrians as the fire was still lingering. That’s how it was for the next 10 days. I could only enter from 2nd Ave. and had to show ID to pass. I went up to the roof to see the damage in daylight and it was that moment I got it, it clicked. My heart sank and sadness sunk in along with guilt that I had used this tragic event as water cooler gossip. These people, three buildings worth, lost everything over night. Several pets lost and worst of all, one life lost. His name was Lenny Thuku and he was only 25.

Manhattan media went crazy for the next two days. The cause of the fire was due to an electrical issue that started in the basement. This biggest moment of the night that caused the most media attention was the heroic rope rescue performed by firefighters to help rescue an 81 year old man from his fifth floor apartment. Once on the ground he was given oxygen by none other than my husband.

The month following they pulled down the building piece by piece. One night I saw a couple escorted by the firemen leaving the building with what looked like the last of their salvageable belongings. Several people reached out to the firehouse cats Instagram account(a happy blog for another time) hoping to find their animals. There were a lot of hopeful leads but no success stories.

I share this story not to make you depressed. I share it to remind you take a second everyday to be thankful for the simple things. Sadness followed me for a long time after that fire. I felt so sorry for those people and scared that life and everything in it is not a permanent guarantee. I made and an evacuation plan that involved strategies to scoop up my cats in case of an emergency and found myself obsessively checking elections odds before bed. I ahead also found an even deeper appreciation for my husbands occupation, surprisingly possible. A year has passed and it is my hope that the displaced residents of east 93rd street have rebuilt their lives and are living happily. I learned a lot that night and the months following. A year later, the now vacant lot where a building once stood is a daily reminder to be thankful everyday for my life, the bed I sleep in, the clothes on my back and most importantly, the ones I love.