Halloween is tomorrow thus perfect timing for a blog post about Halloweens of my New York past. Of the last 13 Halloweens, most were spent carb loading and hydrating for the NYC marathon. Some I just had too many adult things to do and others, I went full on thought-out costume party mode. By October of my sophomore year, I had lost my freshman 25 and was just beginning to find my confidence as an almost-adult. With this new found self-assurance, I decided to try out a “sexy” costume.Thats what girls my age do right? I chose a short Dorothy dress from the Wizard of Oz and used glue and glitter to jazz up a pair of four inch heels and carried around a stuffed dog to be my Todo. That Halloween I was invited by some kids I had become friendly with to join them for the Halloween parade in lower Manhattan. I almost declined, as it was a week night and I was(still am) a goody goody. I gave myself a cliche pep talk about how you only live once as if the events of the night would be life changing and joined my new friends. I felt like such a rebel heading downtown on a school night! If you’ve never been to the parade, I recommend going once. I only went the one time but I feel like it’s one of those only-in-NYC experiences. The Halloween parade is not the type of parade you stand and watch pass by. Rather, you ARE the parade. Thousands of people dress in elaborate costumes and walk the streets of the west village. I don’t remember any costumes in particular but I do remember being awestruck. We finished the night at Taco Bell on 14th street and my rebellious self was home and in bed probably by 11:00. 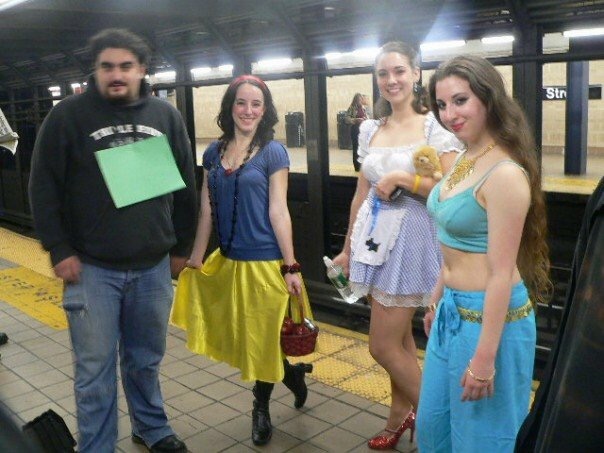 The Dorothy costume was so fun I reused it my Junior year, this time attending a house party in Queens hosted by Patrick Malloy and his roommates. Patrick deserves a blog of his own but I will say, like every house party hosted by Patrick, we had the best time and he ALWAYS drove his friends safely home. The photo from that night is one of my favorite photos of all time. The girls pictured in it made a hugely positive impact on my life and I’m thankful to have that night caught on camera. 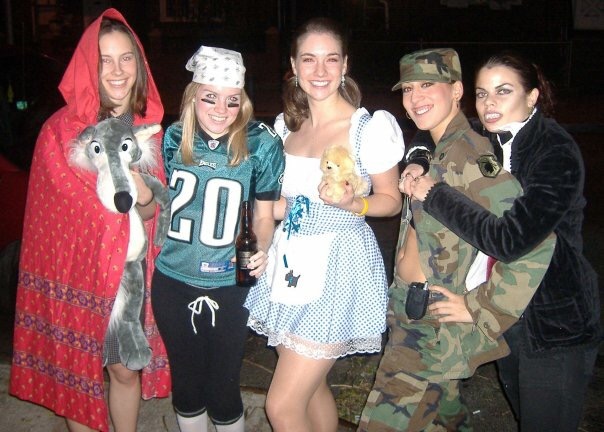 By October of my Senior year, Tom and I were dating. Nothing exclusive but man I was smitten. He wasn’t going to be in town for Halloween but regardless I wanted to chose a costume that would impress him when he saw it posted on my MySpace page. Obviously that meant dressing up as a sexy firefighter. Go ahead, roll your eyes. I’m rolling MY eyes! Two of my closet girlfriends and I dressed up, again on a school night, and hit the town. By “the town” I mean Dorians on the upper east side and the yuckiest of yuck bars. This was before you could text photos but I vividly remember texting Tom while at the bar because that night he texted “143” which apparently means “I love you”. 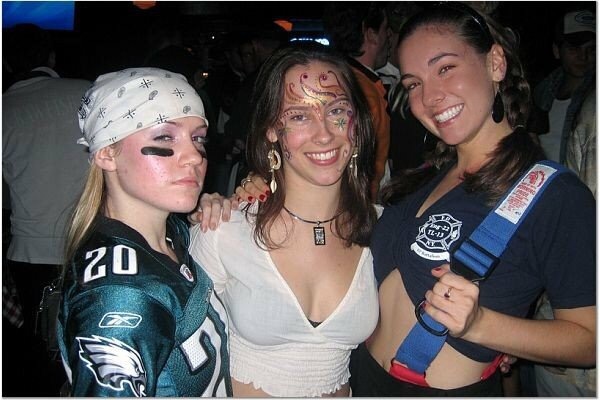 The next year, Tom and I decided to go for a clever couples costume and man did we nail it! We wore matching “I ❤️NY” t-shirts, Statue of Liberty foam crowns, fanny packs and cameras. We were tourists! We played it off all night as if we were actually tourists and just decided to wear our new purchases as our costume. People totally believed us until we confused Hawkeyes and Buckeyes and whatever states they’re from. At one point Tom asked some girl what time Times Square closed because we wanted to catch it that night. This broad said she thought it closed at midnight! We couldn’t stop laughing about that! 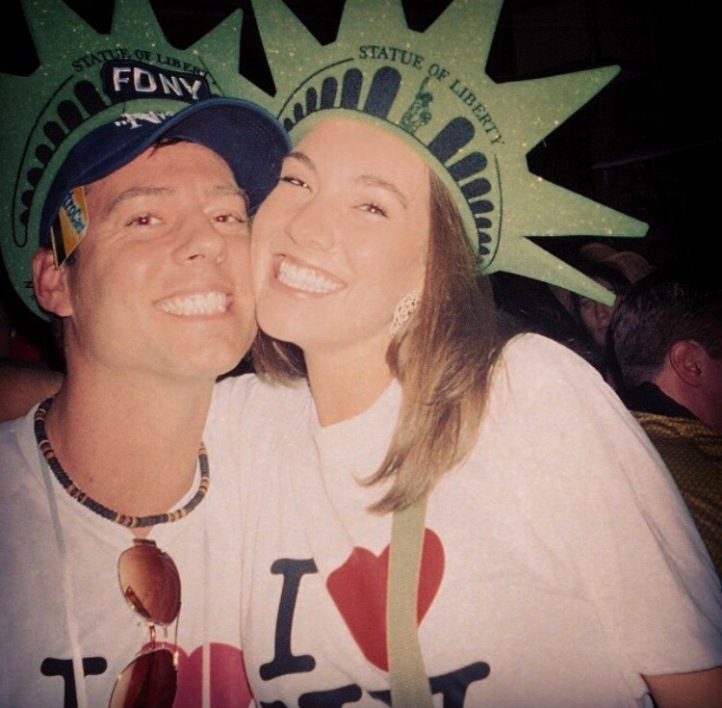 In 2012 Tom and I were going to be in Miami for Halloween and his friends we were visiting had invited us to this fancy party at some mansion. We argued for a long time about what our costumes should be. He was annoyed that every suggestion I made, involved me being sexy and him being a gross old man wearing a robe or tight baseball pants. Finally he suggested we go as “Captain and Coke”, our then drink of choice. Gross. He would be Captain Morgan and he wanted me to be Coca Cola, wearing a giant cylinder around my body. I agreed to the costume idea but had a trick up my sleeve. The night of the party I came down stairs wearing my skin tight coke dress, loving the shock in his eyes. He was not disappointed. 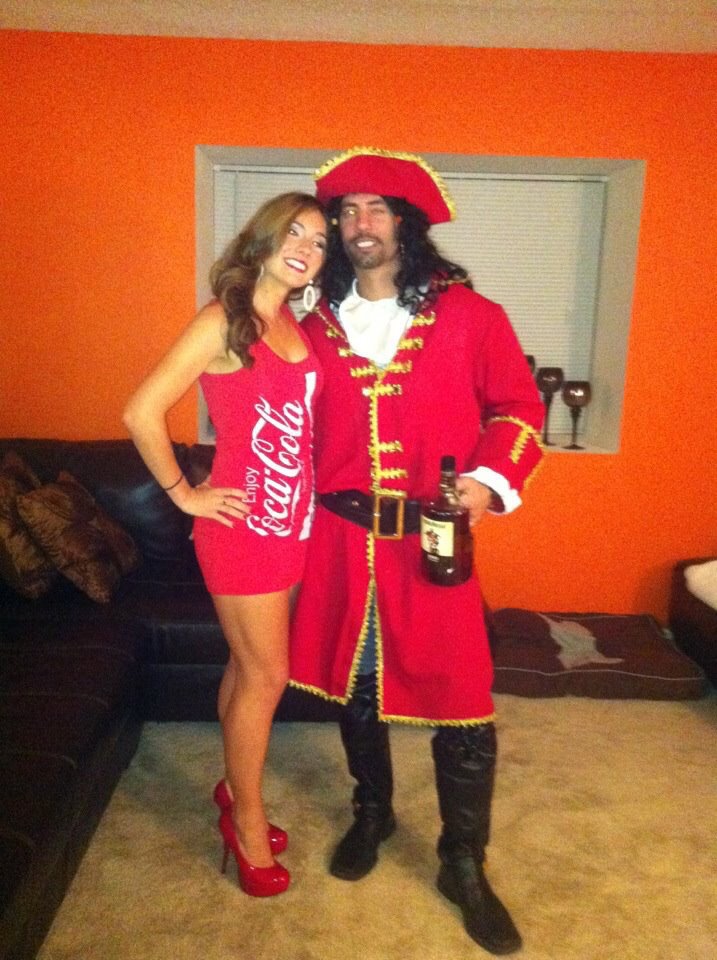 As a kid I remember loving the thought that goes into a costume and then seeing how much of a pillowcase you could fill with candy. Now as an adult, not having trick or treaters coming to my 5th floor walk up, I have little interest in the holiday. This year Halloween is on a Tuesday AND I’m preparing for the marathon. I’m sure future Halloweens will involve more costumes and more memories but this year I’ll just have to settle for these memories, better than any candy-filled pillowcase.