If You’re Going to Run a Marathon, Run New York. Trust me.

It’s marathon weekend and I’m about to participate in my 13th marathon. Lucky 13. At this point the distance is nothing, just keep moving and do it. Seriously though, people who don’t run often ask how in the hell 26.2 miles is doable. My answer is always the same; you just do it. Like Nike. This will be my 5th time running New York City and I assure you it’ll still be just as magical as my very first time. I ran Chicago, another major marathon city and I was told that I would be blown away by the energy. Sorry Windy City, you blew me nowhere compared to the power of the NYC marathon. 26.2 miles of crowds 5-10 people deep. Almost every single step powered by the energy of the spectators and magic of the big apple. In 2011 my bestie Meghan got a spot in the marathon through her job. Plagued with jealousy that I didn’t get a spot, I exercised every connection I knew. It’s true what they say, it’s not what you know, it’s who you know and luckily I knew someone who knew someone who works for New York Road Runners. Boom! My first marathon was about to go down!

I’m my opinion, the training runs are way more difficult than the actual race. There are no spectators, no mile markers, no Gatorade stations and no one to keep you accountable. You are totally responsible for shutting off the part of you brain that is trying to justify why it’s ok to stop and you just do it. My very first training run was nine miles and I did it in Colorado while visiting my parents. I was so proud of this never done before distance. Several hours later I had a fever and major dehydration. It turns out you need electrolytes if you’re going to run 9 miles, especially in high altitude. Lesson learned. I trained up to 20 miles that year, beaming with pride that I could go out and run 20 miles all on my own. Now on my 13th marathon I know I can do it, I just don’t want to.

Marathon day arrived and Meg and I knew we’d be running side by side the whole way, an experience we were psyched to share. Her coworker Kendra joined us and though I had just met her that morning, by the end of that race I felt like I’d made a lifetime friend. We met at the Staten Island Ferry bright and early along with 50,000 other runners. The transportation to the start is equally excruciating and inspiring. You have to get there more than 4 hours before you actually start running. The wait is painful, the anticipation and nerves growing by the second. It starts with the ferry, a perfectly cliche New York experience. You leave Manhattan from the same view our immigrants saw when they arrived in America. Every New York staple in sight; the Statue of Liberty, Ellis island, Freedom Tower, Empire State Building and the Chrysler building. This city was founded by people with high hopes of a better life and the drive to work hard to achieve that. You can feel that as you sail away from the most southern tip of Manhattan. It makes you proud be an American and proud to be a part of this concrete jungle that started it. I know it’s cheesy but it’s true. 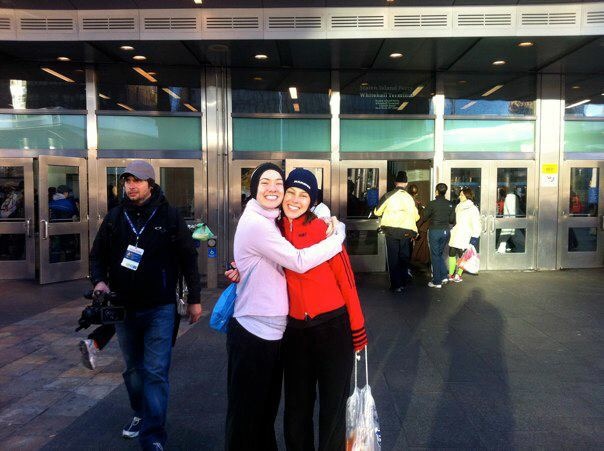 Once on Staten Island you just wait in a bunch of lines. Lines for the bus, lines for security, lines for bag check and worst of all, lines for the port-o-potty. Once in the corral the waiting just fuels the nervous excitement and anxiety. You just want to start already! You wait for so long that when you actually cross the start line it seems too good be true. Frank Sinatra’s “New York, New York” blaring as you take your first steps of 26.2 miles. Nothing makes you feel the spirit of NYC more than that tune! Let’s do this!

The lyrics of good ol Frank fade away as you get going on the Varazano bridge, the first of only two quiet moments of the race. From there it’s 13 solid miles of loud crowds feeding you energy until the next lull. Some give high fives, some give food and some hold signs that might be my favorite mid run entertainment. (See below for some of my favorite signs from marathons passed)

Meghan, Kendra, and I cruised pretty steadily for the first 10 miles where we stopped to pee. Big mistake. Meghan, having been battling a brutal case of ITB syndrome, felt immediate pain after our potty pit stop. Her knee was on fire for the next 16.2 miles. I on the other hand felt like a million bucks and tried to keep her spirits as high as mine. Like the true warrior that she has always been, she just sucked it up and marched along.

Around mile 13.5 you hit the Queensboro bridge, the steepest incline of the run and dead silent as spectators are not allowed on the bridge. It’s about 1.5 miles of a total mind fuck. For some runners it’s make or break as it’s the first time in the run you are all alone with your thoughts and fatigued muscles. Luckily what goes up must go down and on the other side of that bridge is possibly the best part of the race. From dead silence to the loudest crowd ever with one turn off the bridge, the aches and pains float from your brain and you find your second wind. Manhattan at its finest.

For my first race, my parents came from Denver to cheer me on and seeing them and Tom at mile 17 was like a shot of caffeine. Hugs from the three people I love more than anybody sent me flying up 1st avenue smiling from ear to ear! 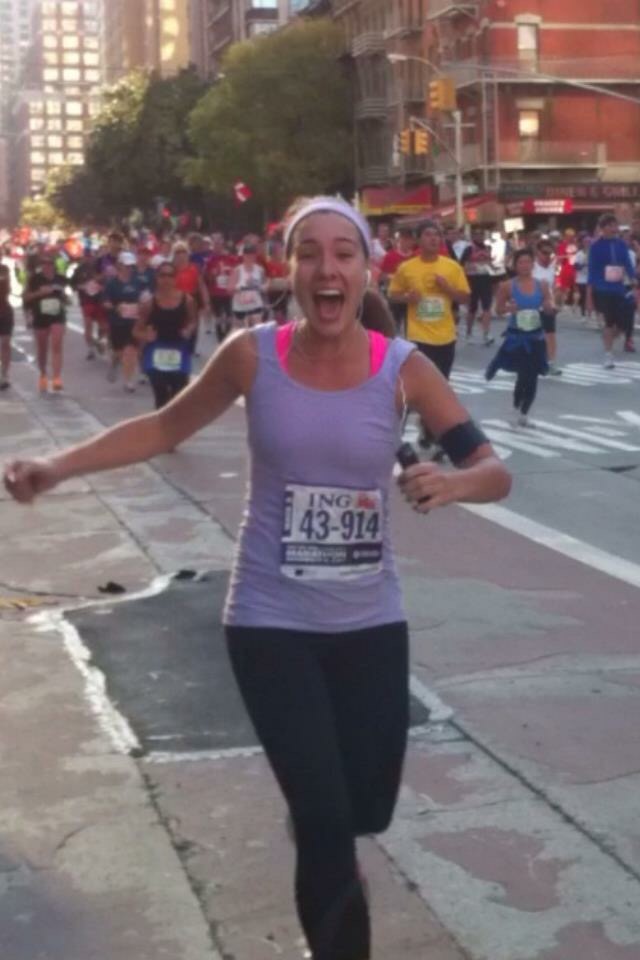 The rest of the race was a gradual decrease in pace  and repetition of “you can do it” mantras.

I got to see me family again in Central Park, approximately mile 25. Another burst of love-fueled energy. Almost there! Meg and I lost Kendra shortly after that, as her bubbly southern personality was giving verbal encouragement to a runner in need. We came around the most southern part of the park, the finish line finally in sight. I reached for my best friends hand, took a big deep breath and together we completed our first marathon ever! The rush and array of emotions as you cross that line is inexplicable. Happiness, pride, relief, fatigue, and nausea just to name a few. 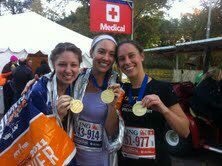 For some, running a marathon is a one and done experience. A check off the the bucket list. For me, it was an instant addiction. There are so many positive things that come from this accomplishment but for me the most rewarding is the overwhelming amount of support from friends, family and even from complete strangers. 50, 000 runners and yet everyone you see that day is just as proud of you as they are for the next runner. Imagine if we encouraged and supported each other like this everyday.
That marathon was the beginning of a very rewarding and also discouraging journey. Since that race, I’ve worked really hard to improve my time, qualifying for Boston being my last goal. In 2015 I ran 5 marathons in one year, two of which were only three weeks apart; Chicago and NYC. I ran both those races at the exact same pace; only 1 min and 45 seconds shy of my goal. I’ve made three attempts since then, now only 80seconds away. I have to do this. I HAVE to! And I will, I just hope it’s on Sunday, my 13th marathon. I have so many amazing people cheering me on and rooting for me, it actually chokes me up a little thinking about them. To those people, you know who you are, thank you. Thank you for your constant encouragement, support, and love. It carries me each and every run and I know the only thing that will make this Sunday different than the rest is that that list of supporters has grown.

With that, it’s time to carb load, make a badass playlist, and drink so much water I pee clear; the three most important steps to prepare for a strong run. See you Sunday 5 boroughs. I am so ready for you!